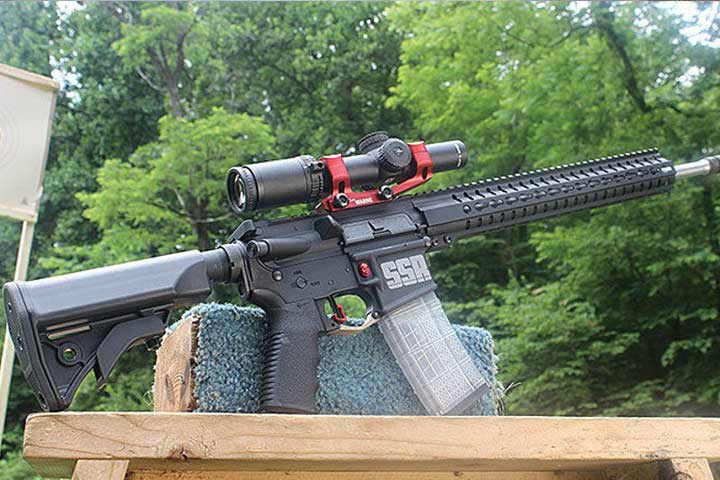 Our Picks for 3-Gun Scope

Though you can find throughout local 3-Gun club s many different classifications with different rules and regulations, there are generally three categories used as a standard across the country.

These are Factory, Tactical and an Open Division category.  Each of them has different limiting factors on what gear, guns, calibers, ammo capacity and optics are allowed.

In the early days of 3-Gun competitions, red dots, holographic sights, and 1x prism scopes were only allowed devices since the 3-gun stages were adapted.  Later, with more proficiency and mastery demonstrated by the shooters, the organizers were forced to extend ranges, making them more distant and smaller.

Usually, 3-Gun stages include various targets set up at different distances requiring from competitors not only excellent shooting skills but also flexible optics that will work well in all kinds of situations.

As the 3-Gun matches usually encompass long-range precision shooting and ultra-close situations, some classes allow shooters to use a high-powered rifle scope and a second optic for the close targets.

While the Low Power Variable Optic (LPVO) is almost an ideal scope for the primary sight, for the second optic, most shooters choose a red-dot reflex sight.

In the next part, we'll try to present you with 10 top-of-the-line scopes and few moderately priced models that offer excellent usability for the price. 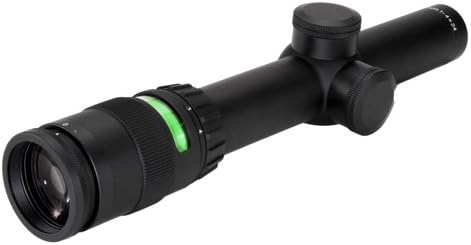 The TR24 is available with three different reticle patterns, but our model TR24G sports a simple post and triangle with a green illuminated aiming triangle at its tip. This is a big 4.2 MOA at 4X triangle, placed on top of a post, with a center of which you can see through.

The Trijicon TR24 AccuPoint 1-4x is very popular among 3-gunners. The shooter can use the reticle at 1x with two eyes open like it's a red dot enabling shooters the close in rapid target acquisition paired with an increased hit potential at distances.

Along with Japanese made glass that provides an excellent light transmission, this variable rifle scope has a straight 30mm tube made of 6061-T6 aluminum, water, fog and shock-resistant. 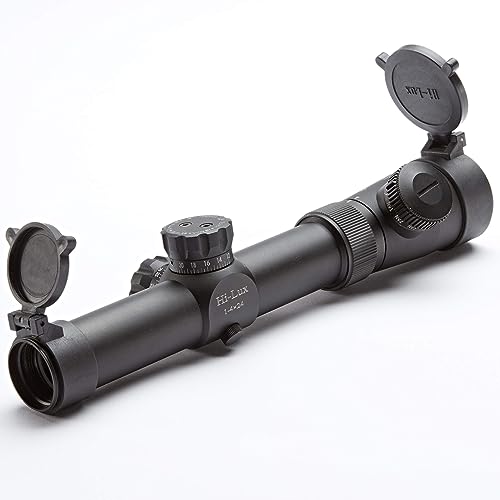 One of the more affordable 3-Gun scopes on our list is the Hi-Lux Optic upgraded CMR4 version of their popular CMR 1-4x24 rifle scope.

As the second generation of CMR (Close-Medium Range) line, this higher-end model features a half-inch shorter length tube than the older CMR, less weight and improved reticle illumination over the CMR.

The CMR4'sCMR4's advanced illuminated reticle lights up both of the open-circles (inner and outer), providing the shooter with precise pre-calibrated aiming points for the 5.56mm (.223 Remington) loads for this CMR4-556 R model, out to 600 meters.

This compact tactical scope comes with one unusual feature, a left-sided windage adjustment. This modification is made upon request of many tactical users and competitors to allow right-handed shooters to make windage adjustments without taking the rifle scope off the target.

The CMR4'sCMR4's capped turrets feature the "ZRO-LOK" System and they are available only in Mils, where each click represents 0.1 Mil.

The Hi-Lux CMR4 rifle scope is built with a tough 30mm one-piece aluminum main tube to be shockproof and sealed for weather resistance. 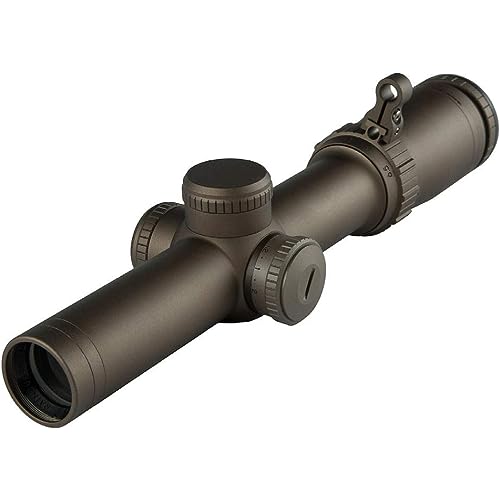 The Bushnell Elite Tactical II Pro SMRS (Short Midrange Rifle Scope) 1-6.5x is one of the best 3-Gun scopes because it was made with input from experienced shooters and seasoned 3-Gun competitors.

The SMRS II has a sleek design due to the low-profile capped turrets designed with a T-Lok locking mechanism for secure and repeatable adjustments in any environment.

The Tactical II Pro SMRS is built of a 30mm aluminum tube and has a standard for the class 24mm objective lens. This waterproof and shockproof scope is also argon-filled optics for the ultimate fog-proof protection. 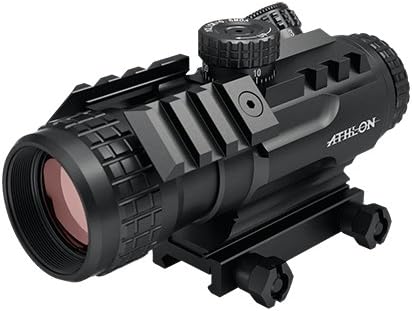 The next device is Athlon Optics Prism Sight 4x34, which combines the simplicity of a fixed powered rifle optics with a two-eye open shooting style to help you shoot accurately and quickly at both short and medium ranges.

The compact Midas BTR PR41 4x34 Prism Sight includes the company's APSR 41 reticle in both red or green illumination. The glass-etched reticle comes in the form of a sizeable ¾ quarter circle with a 1 MOA dot in the middle and a long vertical MOA-based line for ballistic compensations.

Using this fine target circle-dot arrangement and a fixed four power magnification, you will be able for precision aiming up to 500 yards. 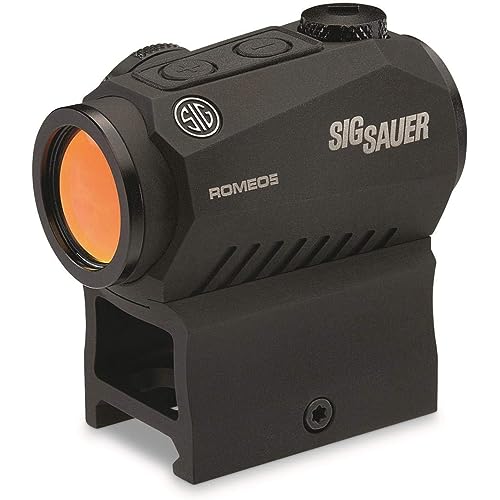 Red dot sights are still an attractive choice for 3-Gun competitors, especially those shooting in Open and Tactical classes.

The precise red dot has eight illumination settings for daytime and 2 for night vision. Additionally, this compact red dot boasts MOTAC (motion-activated illumination) for powering up and down the reticle depending on the weapon angle and movement level.

The Sig Sauer Romeo5 1x20mm is made of a single aluminum piece and rated for complete waterproofness and fog-proof performance. 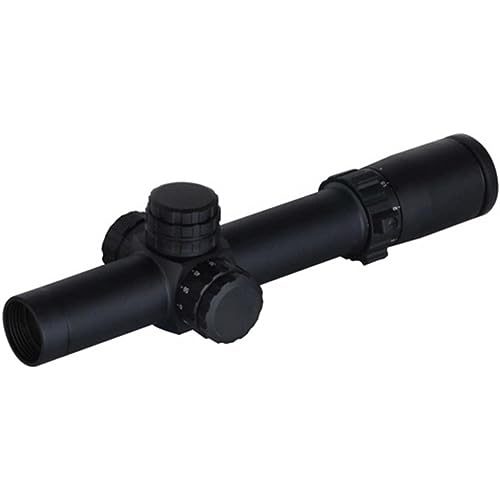 Another LPVO mainly designed for tactical applications that gained massive popularity in 3-Gun circles is a 1-5x24 Tactical Rifle scope by Weaver Optics.

As a part of the new Weaver Super Slam series, the 1-5x24mm Tactical rifle scope is manufactured to the strictest tolerances and features required for tactical work.

The main selling feature of these serious glasses is glass-etched, Weaver'sWeaver's design "Close-Intermediate Range Tactical" (CIRT) reticle. It features a solid center dot that covers .5 mils (roughly a size of a human head at 200 yards) and brackets around the center dot that measures a human head size at 100 yards.

The first-focal-plane reticle comes with red or green illumination with 5 levels of intensity for each color.

The Weaver Tactical is provisioned with fully multicoated lenses and the windage and elevation turrets with a ¼ MOA click value adjustments.

As an ideal optic for an AR carbine and 3-Gun matches, the scope has a 30mm, single-piece tube construction making it waterproof, fogproof and shockproof design. 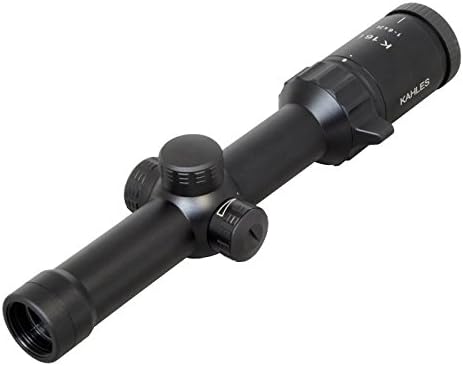 One of the most advanced low power variable scope on the market comes from the Austrian Kahles under designation 1-6x24 K16i Rifle scope.

Without a doubt, the Kahles K16i series of rifle scopes is world class optics delivering features like the largest field of view, excellent edge sharpness and true daytime illumination.

The Kahles K16i class of rifle scopes is well-made optics optimized for the tactical operator and the toughest of conditions. Featuring unparalleled durability, it is based on a 30mm aluminum main tube, which is nitrogen purged and  sealed with O-ring for fog proof and waterproof capabilities. 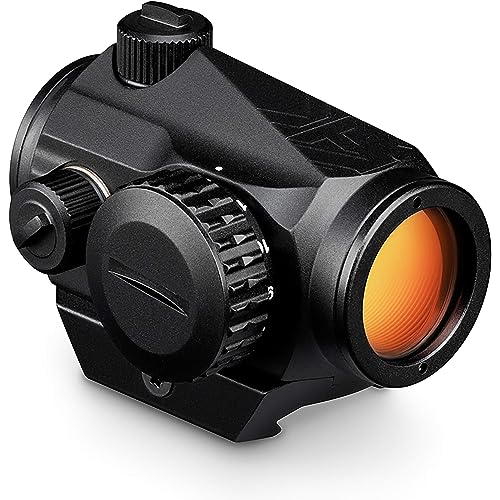 A vital feature of the Vortex Crossfire Red Dot rifle scope is its 2-MOA daylight-bright dot, perfect for an accurate point of impact regardless of lighting conditions or background.

This tube-style red dot has a body constructed of 6060 aluminum with Nitrogen gas purged housing and O-ring-seals for fog proof and waterproof performance.

The Vortex lightweight tactical sight is packed with two height options for 1/3 co-witness mount making it compatible with AR-15, shotguns, pistols, and revolvers. 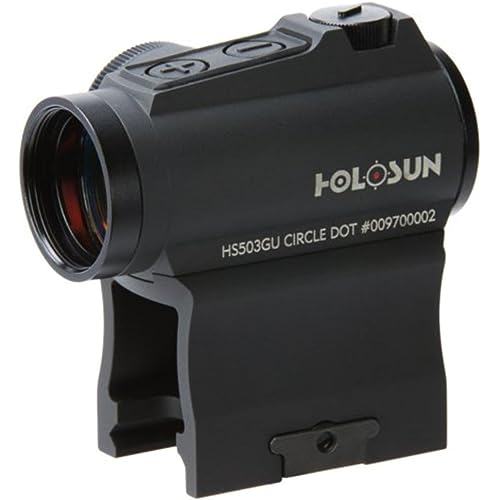 As its name says, the Holosun HS503GU comes with a circle dot reticle. In fact, there are two reticle options to choose from; one is a regular2 MOA dot and the second is a 2 MOA dot surrounded by a 65 MOA circle.

The circle dot with the reticle pattern has 12 illumination intensity levels, including 2 Night vision compatible settings.

This small tube sight comes with buttons for the illumination control on the top, whereas the windage and elevation knobs are shrouded on two sides of the unit.

Unlike some other Holosun models with dual power, this Holosun 503GU red dot uses one CR2032 battery with expecting a life of up to 20,000h with circle dot and 50,000 with a single dot. 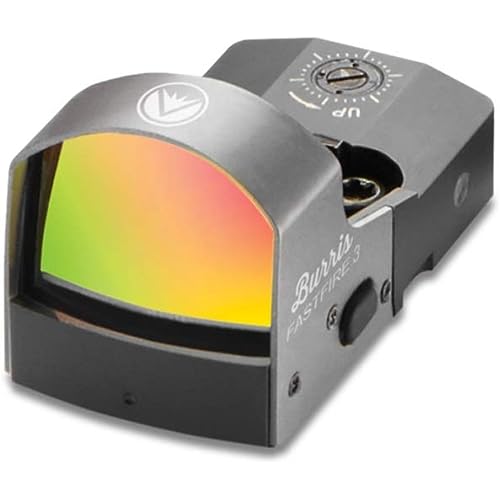 Although you can mount the Burris FastFire III Red-Dot Reflex Sight on any of your favorite weapons, Fastfire 3 is one of the best shotguns 3-Gun optic.

While compact and lightweight, the Burris Fastfire 3 red dot sight features sturdy and a shockproof construction to withstand the heavier recoil of 12-gauge scatterguns.

Since this full-sized red dot optic weighs only 0.9 oz and measure 1.9" in length, it is perfect for mounting not only to the shotgun but also the FastFire III will match up well with handguns, AR-style carbines or lever guns.

This Burris reflex sight offers unlimited eye relief and is available with a 3 or 8 MOA dot, so you will be able to shoot your favorite hunting rifle with accuracy out as far as 200 or 300 yards.

The sight is powered by 1 CR1632 lithium battery with an expected service life of 10,000 hours.

Having a scope that is adjustable between 5 and 500 yards is a too demanding task for any newcomers to 3-Gun shooting matches.

There is no best scope for everything, so that one might choose the LPVO scope, the other will opt for old school, choosing a simple red dot, while the third might combine both of them in 3-Gun classes where it is allowed.

L.P Brezny has been writing and reviewing product as well as how to projects for the past 50 years. He has authored four books on shooting with three on long range, and one covering shotgunning. With 26 years on a metro police department as a street officer and the rank of SGT / training L.P. has covered all the bases regarding weapons and street survival.

During the early years in non-toxic shotshell ammunition development L.P. designed the first successful measurement system for recording the speed of shot shell payloads down range. He was responsible for getting actual shotshell velocities printed on factory load boxes. Over the years he has developed and markets MetroGun System TM, and sells his designed ammunition for subsonic sound suppressed shotgun shooting.

Current L.P. resides in the South Dakota Black Hills and spends a good deal of time working through many types of ammunition both in the field on warm targets. With ultra long range being a current specialty L.P. shots for test and accuracy at ranges as great as one or more miles on the wide open Dakota grasslands.

Rangefindertoday.com is a participant in the Amazon Services LLC Associates Program, an affiliate advertising program designed to provide a means for sites to earn advertising fees by advertising and linking to Amazon.com.

Amazon and the Amazon logo are trademarks of Amazon.com, Inc., or its affiliates. Additionally, Rangefindertoday.com participates in various other affiliate programs, and we sometimes get a commission through purchases made through our links.

We do not specifically market to children under 13.